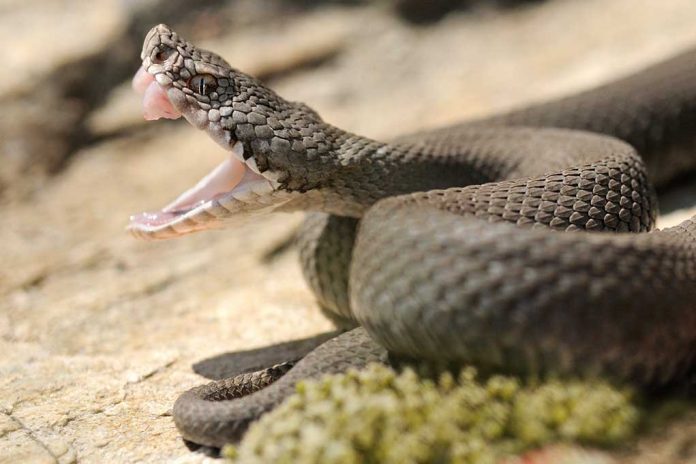 (ModernSurvival.org) – Snakebites are a serious danger around the world. In fact, according to the World Health Organization (WHO), it’s estimated that 5.4 million people are bitten by snakes each year. Of those bitten, roughly 100,000 or more die due to the bite. Unfortunately, one little girl has joined this statistic under bizarre circumstances.

Most people don’t think twice about using the restroom; they simply do their business and go about their day. For 6-year-old Tamara Abdul Rahman, a seemingly uneventful trip to the bathroom ended in tragedy. Unbeknownst to Rahman or her family, a venomous serpent had slithered its way into the toilet, where it bit the little girl.

Despite being rushed to Asir Central Hospital and treated for the bite, young Rahman passed away. According to the girl’s father, the family never expected to find a snake in their toilet, especially since they live in a city.

The terrible fate that claimed Rahman’s life in Saudi Arabia is a reminder to always check your surroundings for danger, even in the most unlikely of places. Snakes can find their way into locations no one would ever suspect, which is why it’s important to know what to do when faced with one.

How to Avoid Being Bitten by a Snake

Snakes are found all over the world. While not all species are venomous, without the proper knowledge, it can be difficult to determine the danger level a snake presents.

Obviously, no one wants to get bitten by a snake — especially if they find out they encountered a venomous species and are now in serious danger. So how can a person avoid being bitten to begin with?

The best course of action to avoid getting bitten by a snake is to avoid the snakes themselves. Unfortunately, this sounds a lot easier than it really is. Snakes are found just about everywhere, and even have a tendency to make their way into buildings, including homes, from time to time.

Since avoiding areas where snakes roam can be difficult, the best bet is to spot a snake before it comes within striking range. This, too, can be hard, as many snakes blend into their environment with natural camouflage.

The fastest way to get bitten is to step on a snake. When traveling through “snake country”, take care with every step. Also, be wary while rock climbing, particularly before grabbing branches or overhead ledges.

When Encountering a Snake

The first thing to know is that the majority of the snakes in the world aren’t looking to bite people. In fact, they are generally more afraid of humans than humans are of them. Snakes go through life looking for food and attempting to avoid being stepped on by larger animals, including people.

Generally, a snake will slither off to avoid a person who comes too close. However, if it is cornered or it just happens to be an aggressive snake, there could be a problem.

In the event a snake makes its way into the backyard or into the home itself, the best bet is to call wildlife management. They are professionals who can capture the snake and relocate it.

While it may seem easier to just kill the snake, doing so could be dangerous. Remember that even a dead venomous snake is still venomous, and an accidental encounter with the snake’s fang could end very badly.

If all of these methods fail and you or someone nearby is bitten by a snake, there are ways to slow the spread of venom and give them a shot at survival. Take a look at our article here to see how to survive a snake bite.