In a Food Shortage Scenario, What is the Most Important Hunting Tool You Need to Stay Alive?

Why snare traps? Snare traps are cables with fittings on them that serve as trapping devices that work even when you don’t. They are unobrtusive, easy to transport, and they can keep you stocked in small game even if you have no skill with a gun or other weapon. They are what is known as a passive method of gettting wild game, because you don’t have to be there for it to work. The next best answer would be a sling shot because you don’t need any special ammo to use it, it’s light enough to keep in your Bug Out Bag, and it offers a silent kill method so you don’t alert anyone nearby.

You’ll need to anchor the snare so that when you do catch an animal, he or she doesn’t take off with it. This type of trap has a swivel fitting at the end of the cable. You’ll want to put a piece of wire through that fitting before securing it to something nearby — most likely a tree.

Once your trap is anchored, set the snare so that it is just a bit larger than the head of the animal you’re trying to catch. Then, prop it up using a stick or branch. The idea is to set the trap so that the animal tries to walk through it. The lower the animal is to the ground, the lower to the ground your trap should be. When their head is in the trap and they keep walking, the snare will tighten, trapping the animal.

Any time you buy a trap, do it with a particular animal or type of animal in mind. Snare traps are meant for small game, so you’ll want a cable about 3/32 inches thick, and about 5 feet long. If you’re making your own, don’t go too far beyond these parameters because the cable will be hard to manipulate if it’s too thick. If it’s too long, you’ll spend more time intangling it than you will skinning the animal you caught.

Remember, snaring is just one method of trapping animals. You can also use pits, cages, and other creative methods. Now, you just have to learn what to do with the animal after you catch it.

How to Set Up a Snare Trap 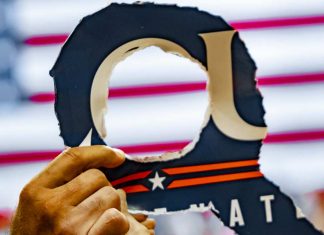 (Modern Survival.org) - The QAnon movement has recently made big waves in the media. Portrayed as a negative and dangerous “conspiracy theory” perpetrated by...