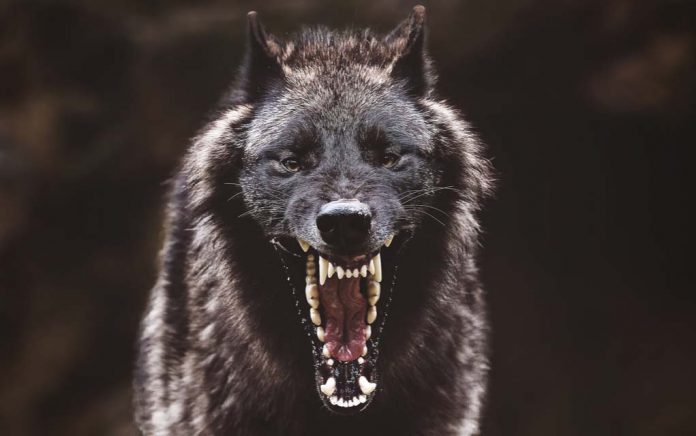 (ModernSurvival.org) – Wolf sightings have increased more as we invade their territory. While it’s unlikely to be attacked by a lone wolf, a pack may be more willing to strike out at you. Even if you’ve never encountered a wolf before, knowing how to survive an attack may save your life if you ever do.

Wolves are unlikely to attack you, even in packs. But there’s always a chance it could happen. In the 60 years between 1942 and 2002, only 49 cases of wolf attacks were documented in Alaska and Canada. Regardless, wolf attacks do occur, and it’s up to you to know how to respond.

Things are much easier when dealing with one wolf rather than dealing with a pack, especially when you aren’t alone. However, when facing a pack, things can quickly go against your favor.

Responding To a Potential Wolf Attack

The first thing you need to do is act submissive; running will only cause the wolf’s instinct to chase their prey to kick in. Besides, wolves can run at speeds of up to 40 miles per hour, outpacing the world’s fastest man, Usain Bolt. You’re not getting away.

Second, avoid making eye contact, as this may seem like a direct challenge. Additionally, you should keep your head bowed slightly and lowered — avoid any sudden moves.

Third, if the wolf approaches you, assert your dominance over the situation. Do this by raising your arms above your head and yelling or screaming while clapping your hands. Wolves are extremely territorial and may see this as you claiming your space. Of course, if you’re within its territory, you’re not going to scare it away — you’re likely only going to buy yourself some time to escape.

As the wolf comes closer, don’t turn your back on it. Instead, back away slowly making sure to keep your balance as you go; falling will only make you an easy target.

Finding a group of people or an open fire will discourage the wolf from coming any closer. Climbing a tree is also an option. Just remember always to face the wolf when doing so.

Wolves go for the throat when killing prey. If one lunges at you, curl into a fetal position to protect your neck, throat, and jugular. You can also fight back, demonstrating you’re not an easy kill.

Use anything you can from your surroundings: rocks, sticks, and whatever else you may have to swing at the wolf. Aim for the face and other sensitive areas to prove you’re not going down without a fight; this may discourage it from furthering its attack.

Wolves will target the weakest link like children, the elderly, and the injured. These people should always be in the group’s center when approached by a wolf or pack of wolves. Be sure to have someone watching in every direction for movement and any advances made by wolves.

While wolf attacks are rare in the wild, your chance of being attacked dramatically increases when you get closer to their den and family. A wolf will do whatever it has to protect its family, no different than us humans. So, do your best to keep a lookout for any dens to avoid a confrontation in the first place.