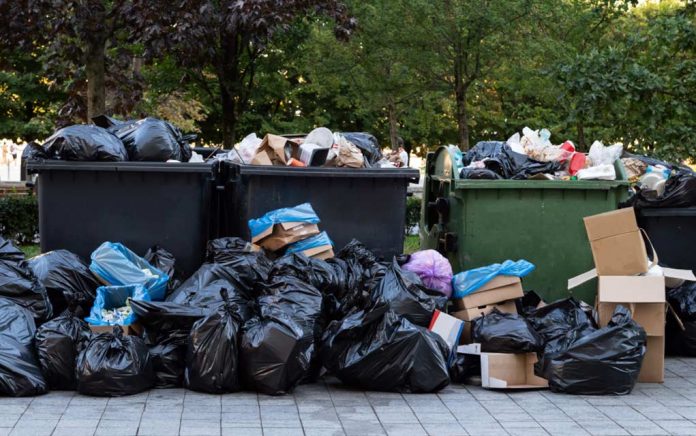 Dangerous DEBRIS – Why Your TRASH is a Threat!

(Modern Survival.org) – Most people don’t think twice about the trash they throw out. They simply take it to the curb once or twice a week to be hauled away to a landfill. But what if sanitation services were to come to a grinding halt? Where would all that garbage go?

According to the Environmental Protection Agency (EPA), Americans produce roughly 4.9 pounds of garbage per person every day. For a family of four, that equates to nearly twenty pounds of trash a day. In a grid-down scenario, there will still be trash to dispose of but no convenient way to have it picked up every week.

Without a way to dispose of waste, it will quickly begin to accumulate. As mounds of garbage pile up, problems will arise that could become life-threatening in a grid-down scenario.

Properly disposing of garbage will be important in any kind of disaster. So what options are there to handle the trash?

It is possible to dispose of garbage by burning it, but there are safety precautions to be aware of. Burning garbage can release toxic chemicals such as dioxins into the air. These chemicals are known to cause a variety of side effects, from skin lesions to immune deficiency and cancer. If burning garbage is your only option, keep plastics out of the burn pile. They produce the worst toxins when burned.

If sanitation services go down, consider burying trash as far away from home as possible. A four- to five-foot-deep hole covered in a foot or two of earth will get rid of the garbage. If you intend to use the hole more than once, place a sheet of plywood over it secured with heavy objects to keep animals out. It should be covered with dirt when no longer in use.

In a survival scenario, recycling centers won’t be operational. That doesn’t mean you can’t upcycle items yourself. Upcycling means using items creatively once they have outlived their original intended use. For example, old tires can be used for a variety of projects once they are worn out.

Composting is the practice of collecting organic recyclable materials and allowing them to break down naturally. Kitchen scraps and paper goods can be added to a compost pile, then repurposed into fertilizer. Not only will this help dispose of garbage in a prolonged grid-down scenario — it could help grow a survival garden, too.

Trash can become a major problem in the aftermath of a disaster, so knowing how to handle it is a large step toward staying safe and healthy. Just like the used tires mentioned above, other pieces of “garbage” can be repurposed as well. To see one such item, check out our article here.