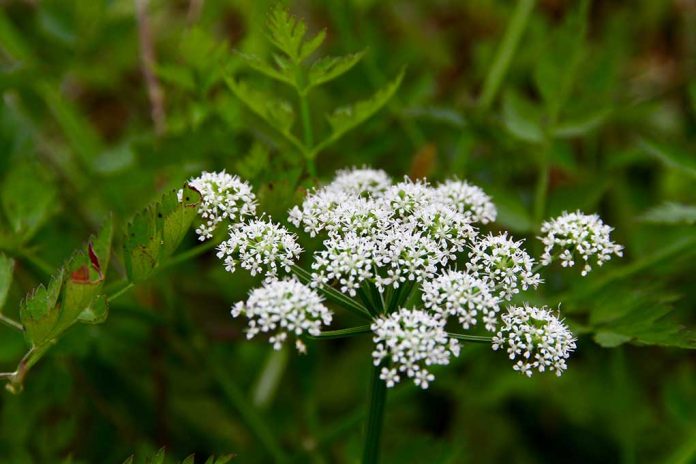 (ModernSurvival.org) – There are plenty of plants in the wild that survivalists should steer clear of when foraging. For example, poison ivy and poison oak are famous for causing rashes and irritation, but generally, they aren’t deadly. Other plants, on the other hand, can kill. Let’s take a look at one of them.

Cicuta douglasii, commonly known as water hemlock, is the most dangerous plant in North America. According to the U.S. Department of Agriculture (USDA), water hemlock contains cicutoxin, which attacks the nervous system, leading to grand mal seizures and death. It doesn’t take a large amount of the plant to be deadly, either. Even small doses can kill humans and livestock alike.

Unfortunately, because the toxin works so quickly, those who become poisoned by it can rarely be saved. This is why identification and avoidance are vital to survival.

How to Identify Water Hemlock

Due to its extremely poisonous nature, it is important that everyone knows how to recognize water hemlock. In the following video, WikiHow explains the identifying characteristics of the plant:

The most identifiable feature of water hemlock is the small white flowers that bloom in umbrella-like clusters. Its flowers consist of five white petals, five stamens, and a greenish center. Generally, water hemlock grows in wet areas such as meadows, pastures, and along the banks of streams or rivers.

Poisonous plants such as water hemlock can cut a survival situation short, which is why it is absolutely vital to learn how to identify them. There are many myths in circulation about how to tell if a plant is truly poisonous, and some of them can get a person killed. To learn about one such myth, check out our article on using birds as edible berry indicators.