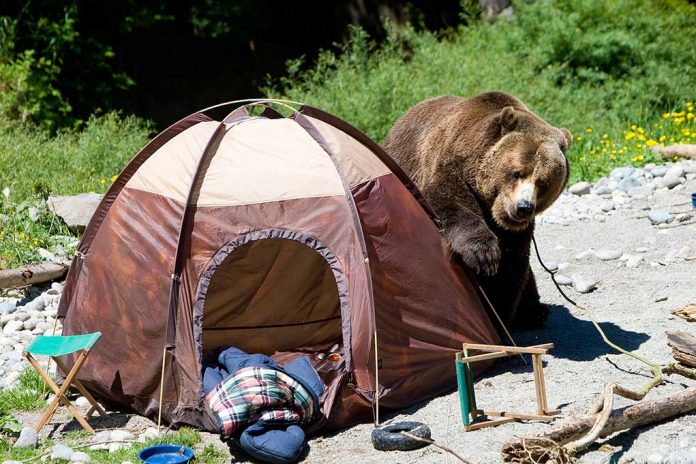 (ModernSurvival.org) – While camping near the Bob Marshall Wilderness in Montana, Leah Davis Lokan was dragged from her tent and mauled to death by a grizzly bear. The 65-year-old Californian was on a mountain biking trip with two companions before falling victim to the bear.

While not all bears are put down following attacks on humans, because this grizzly was not protecting cubs and the mauling was not the result of a surprise encounter, it was deemed a threat. Friday, July 7, wildlife officials set a trap for the grizzly bear at a chicken coop it had been raiding near Ovando, Montana, and shot it.

Campgrounds near Ovando will remain closed until DNA tests confirm the 400-pound animal was the culprit in the campground attack. Officials are confident they shot the correct bear based on eyewitness reports and tracks from both the site of the attack and from the area surrounding the chicken coop.

When enjoying the great outdoors, there is always a chance of coming face-to-face with wildlife. While many people may dream of such an encounter, some creatures are better viewed from afar. As the story above demonstrates, bears can and will invade campsites — and the results can be fatal.

So how can a person lessen the chances of encountering a bear in the wild? Here are a few tips:

If a bear does decide to attack, how a person should respond will vary depending on the type of bear. To see how to react, check out our article on how to survive an encounter with a bear.