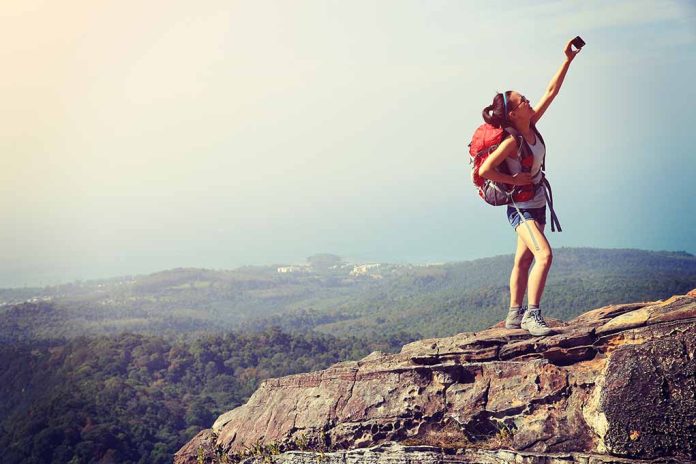 (ModernSurvival.org) – In today’s world, millions of people carry cell phones with them wherever they go. Along with this luxury comes the ability to take pictures anywhere. This has given rise to the “selfie,” a picture taken of oneself using a smartphone, which is usually shared on social media later.

While selfies are generally harmless, some people take them to extremes, putting themselves in danger. A 33-year-old woman from Belgium was one of those people — and it cost her her life.

Woman falls 100 feet to her death from cliff in Belgium after posing for selfie https://t.co/D5pfyq0181 pic.twitter.com/HLs3XUyOu9

Zoe Snoeks was on a road trip across Europe with her husband, Joeri Janssen, and their two dogs when they decided to visit a scenic site in the province of Luxembourg. The couple intended to take photographs on and around the Herou, a 4,600-foot tall rock.

According to Janssen, his wife told him to “look out for the dogs” while she took photos from the top of a cliff. He told the dogs to stay put and turned to find his wife missing in a cloud of dust. She had slipped and fallen while attempting to take a selfie.

Rescue workers located Snoeks’ body and the cell phone used to take the lethal photograph. Janssen says the last photo on the device was taken at the edge of the cliff, showing his wife and the river below where she was eventually found.

This isn’t the first time a person has died while attempting to take a selfie. In 2020, 31-year-old Olesia Suspitsina fell to her death while taking a selfie on the edge of a cliff in Turkey.

In 2018, a study from the All India Institute of Medical Sciences found that, between 2011 and 2017, 259 people had died in incidents related to taking selfies. That number has surely grown by leaps and bounds since then.

Taking photographs to record memories and share experiences online isn’t a bad thing, so long as one is conscious of their environment while doing it. While taking a photograph in a dangerous place may seem adventurous and give a person bragging rights, no picture is worth losing one’s life.