A “dirty bomb” can be deadly and have devastating affects. It is a mixture of both explosives and?

A “dirty bomb” is a mixture of explosives and radioactive material. Here’s why…

The U.S. government has spent billions in the name of fighting terrorism. After the September 11 terrorist attacks, nothing was ever the same.

Local, state, and federal governments have been very proactive in implementing safety measures to help keep Americans safe. But even after all the implemented safety measures, are we any safer?

Terrorist will stop at nothing to strike fear into those who don’t share their views or values. This includes the use of “dirty bombs” all over major cities.

Most of the time, the best defense against such potential acts of violence is knowledge and preparation. Here’s what you can survive a “dirty bomb.”

What is a “Dirty Bomb”
It’s not like a nuclear bomb or even considered to be a nuclear weapon. Also known as a radiological dispersal device (RDD), this bomb combines explosives like dynamite, with radioactive material like the stuff found in Chernobyl.

This type of bomb is not easy to make because of the high level of radioactive material needed to affect so many at once. The blast can have devastating effects though and there really isn’t a way to measure just how much radiation there. It’s best to treat a “dirty bomb” the way it sounds.

How to Survive a “Dirty Bomb” Blast
If a “dirty bomb” were detonated in your city and you have been told by government officials that their may be a release of radioactive materials, you should:

Other precautions to take at home or in an office:

Stay indoors until you receive instructions from authorities and be sure the information is coming from a credible source.

We live in a world where terror threats are real. Stay informed and be prepared. It could save your life.

The Inevitability of Dirty Bombs 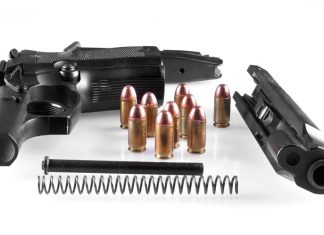 How to Break in a New Gun

The Top 10 Official Threats To America