(ModernSurvival.org) – Concerns over local acts of terrorism are very real, arguably now more than ever. Gone are the days of expecting an attack to come solely from overseas groups like Al Qaeda or ISIS. Now, we’re forced to add new menaces to the ever-growing list of potential threats against our country. President Donald Trump’s recent declaration of intent to name both the Ku Klux Klan (KKK) and Antifa as terrorist organizations prove this.

With frequent acts of domestic terror in the news, many Americans are wondering how they can protect themselves and their families from being in the wrong place at the wrong time. We can’t live our lives in fear. We still have to go to work, take the kids to school, and do our shopping.

With the constant threat of civil unrest and terrorism looming overhead, what can Americans do to protect themselves?

In a Dangerous New World, Vigilance is Key

So how can Americans go about our lives under the constant threat of destruction? Vigilance.

[Vigilance] means being aware of what’s happening in your neighborhood, in the places where you shop, in your work environment, etc. If more people are vigilant, chances are, anything suspicious will be noticed and can be reported to the local authorities immediately.

The critical process of developing vigilance could save countless lives. Prior to the 2015 San Bernardino, California, terrorist attack at the Inland Regional Center, people who lived near the terrorists were suspicious, but did not feel alarmed enough to report them. Had they been vigilant enough to notice a problem and take action, the event may never have happened.

Not all acts of terrorism involve mass shootings or explosions, however. To many, the recent large-scale rioting could easily fall into the category of domestic terrorism. Americans have watched in horror as cities burn, businesses are looted, people are dragged from their vehicles and beaten, and police officers are assaulted on the street.

Current events have proven that local authorities can become overwhelmed, leaving us on our own to defend ourselves. Were we to face another large-scale terrorist attack, or should the civil unrest continue to escalate, these disruptions could be far worse. We could lose utilities, access to food, freshwater, fuel, and the freedom to safely move about without fear of even greater rioting mobs and desperate, unprepared people.

What does your family need to make it through days, weeks, or even longer without access to food, water, and the basics of modern living? (Remember when COVID-19 first hit and toilet paper was nowhere to be found?)

Additionally, we should consider being first responders when police or other agencies become spread so thin that they can’t help us. It’s time to expand our thinking beyond mere home security systems. What’s happening in the world today is forcing us to consider the need to protect our home and family in the event rioters expand into urban areas — as they did in Portland earlier this year.

It all starts with accepting the reality that things can get out of control quickly, and that preparation is cheap insurance. At the end of the day, our survival is our responsibility. For additional information on how to defend yourself from a rioting mob, click here. 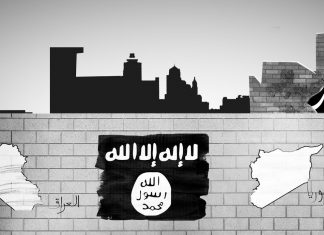 A Brief Origin Of The Islamic State (ISIL or ISIS)

ISIL or ISIS (The Islamic State Of Iraq and the Levant) has managed to quickly control vast areas of Syria and Iraq. They went...

California Bar Shooting: What We Can Learn From It