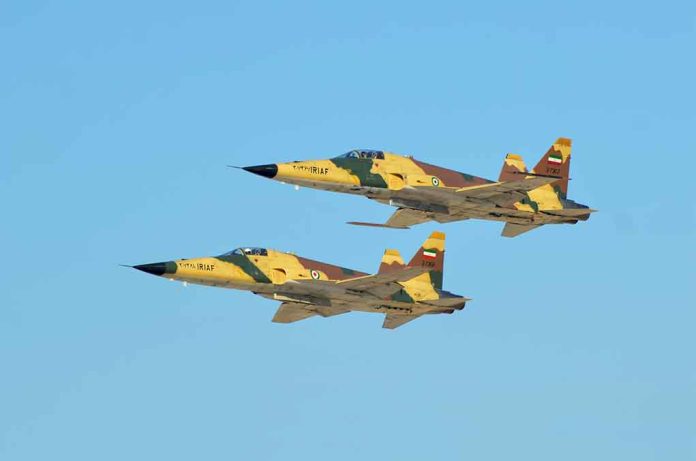 (ModernSurvival.org) – Military technology has advanced by leaps and bounds over the centuries. From stones and spears to tanks and planes, the weapons of war are terrifyingly effective. Unfortunately, the tech that runs these machines breaks down over time, leading to deadly malfunctions. For the 1.6 million people of Tabriz, Iran, this became a horrible reality as a fighter jet plummeted from the heavens.

#BREAKING
🚨 An Iranian Air Force F-5 fighter jet crashed in Tabriz due to a technical defect.

📌 Two of the pilots, as well as a civilian, were killed in the crash.
It should be noted that this jet hit a school where fortunately no students were present.#IRAN pic.twitter.com/AL6vlpAeCR

The F-5 jet suffered technical problems during its flight, forcing the pilots to make the decision to land on a soccer pitch at a local school. The commander of the air base in Tabriz, General Reza Yousefi, claims the pilots refused to eject before impact, instead choosing to direct the plane away from residential areas once it became clear that they couldn’t reach a landing field.

Unfortunately, the pitch wasn’t long enough to handle the emergency landing and the plane slid into the school, killing both pilots and a civilian. The school was thankfully abandoned as Iran is battling its sixth wave of COVID.

Many point to Iran’s use of old aircraft purchased from the United States in the late ’70s for the crash. Sanctions against the country have made it difficult to properly maintain the fighter jets, likely leading to the technical issues that brought the plane down. The exact cause of the crash is still under investigation.

How to Survive a Drought

Drought Survival - Preparation is VITAL (ModernSurvival.org) - Droughts are often overlooked when it comes to natural disasters, as people tend to focus on tornados,...