BlackLivesMatter or “The Movement for Black Lives” posted a 22 page list of “demands” in what they called “A Vision of Black Lives: Policy Demands for Black Power, Freedom and Justice.”

The demands are extensive and can be categorized as “interesting” to say the least. Some of the demands call for:
-Free and open access to all public universities
-Retroactive forgiveness of all student loan debt
-Passage of H.R. 40 to study a “Reparation Proposal for African Americans”
-Removal of police from schools
-Retroactive decriminalization and release of all people held on drug and prostitution-related offenses and a restructuring of local state and federal tax codes to achieve a “radical and sustainable redistribution of wealth.”

BlackLivesMatter has mostly been known for protesting use of force and wrongful killing of African-Americans by law enforcement. The movement has been legitimized by President Obama and other Democrats, in particularly Democratic Presidential Nominee Hillary Clinton.

Here’s a closer look at the list of demands presented below:

End the War On Black People
-An immediate end to the criminalization and dehumanization of Black youth across all areas of society including, but not limited to; our nation’s justice and education systems, social service agencies, and media and pop culture. This includes an end to zero-tolerance school policies and arrests of students, the removal of police from schools, and the reallocation of funds from police and punitive school discipline practices to restorative services.
-An end to capital punishment.
-An end to money bail, mandatory fines, fees, court surcharges and “defendant funded” court proceedings.
-An end to the use of past criminal history to determine eligibility for housing, education, licenses, voting, loans, employment, and other services and needs.
-An end to the war on Black immigrants including the repeal of the 1996 crime and immigration bills, an end to all deportations, immigrant detention, and Immigration and Custom Enforcement (ICE) raids, and mandated legal representation in immigration court.
-An end to the war on Black trans, queer and gender nonconforming people including their addition to anti-discrimination civil rights protections to ensure they have full access to employment, health, housing and education.
-An end to the mass surveillance of Black communities, and the end to the use of technologies that criminalize and target our communities (including IMSI catchers, drones, body cameras, and predictive policing software).
-The demilitarization of law enforcement, including law enforcement in schools and on college campuses.
-An immediate end to the privatization of police, prisons, jails, probation, parole, food, phone and all other criminal justice related services.
-Until we achieve a world where cages are no longer used against our people we demand an immediate change in conditions and an end to public jails, detention centers, youth facilities and prisons as we know them. This includes the end of solitary confinement, the end of shackling of pregnant people, access to quality healthcare, and effective measures to address the needs of our youth, queer, gender nonconforming and trans families.

Reparations
-Reparations for the systemic denial of access to high quality educational opportunities in the form of full and free access for all Black people (including undocumented and currently and formerly incarcerated people) to lifetime education including: free access and open admissions to public community colleges and universities, technical education (technology, trade and agricultural), educational support programs, retroactive forgiveness of student loans, and support for lifetime learning programs.
-Reparations for the continued divestment from, discrimination toward and exploitation of our communities in the form of a guaranteed minimum livable income for all Black people, with clearly articulated corporate regulations.
-Reparations for the wealth extracted from our communities through environmental racism, slavery, food apartheid, housing discrimination and racialized capitalism in the form of corporate and government reparations focused on healing ongoing physical and mental trauma, and ensuring our access and control of food sources, housing and land.
-Reparations for the cultural and educational exploitation, erasure, and extraction of our communities in the form of mandated public school curriculums that critically examine the political, economic, and social impacts of colonialism and slavery, and funding to support, build, preserve, and restore cultural assets and sacred sites to ensure the recognition and honoring of our collective struggles and triumphs.
-Legislation at the federal and state level that requires the United States to acknowledge the lasting impacts of slavery, establish and execute a plan to address those impacts. This includes the immediate passage of H.R.40, the “Commission to Study Reparation Proposals for African-Americans Act” or subsequent versions which call for reparations remedies.

Invest – Divest
-A reallocation of funds at the federal, state and local level from policing and incarceration (JAG, COPS, VOCA) to long-term safety strategies such as education, local restorative justice services, and employment programs.
-The retroactive decriminalization, immediate release and record expungement of all drug related offenses and prostitution, and reparations for the devastating impact of the “war on drugs” and criminalization of prostitution, including a reinvestment of the resulting savings and revenue into restorative services, mental health services, job programs and other programs supporting those impacted by the sex and drug trade.
-Real, meaningful, and equitable universal health care that guarantees: proximity to nearby comprehensive health centers, culturally competent services for all people, specific services for queer, gender nonconforming, and trans people, full bodily autonomy, full reproductive services, mental health services, paid parental leave, and comprehensive quality child and elder care.
-A constitutional right at the state and federal level to a fully-funded education which includes a clear articulation of the right to: a free education for all, special protections for queer and trans students, wrap around services, social workers, free health services (including reproductive body autonomy), a curriculum that acknowledges and addresses students’ material and cultural needs, physical activity and recreation, high quality food, free daycare, and freedom from unwarranted search, seizure or arrest.
-A divestment from industrial multinational use of fossil fuels and investment in community- based sustainable energy solutions.
-A cut in military expenditures and a reallocation of those funds to invest in domestic infrastructure and community well-being.
-Financial support of Black alternative institutions including, but not limited to: cooperatives, land trusts, and a culturally responsive health infrastructure.

Economic Justice
-A progressive restructuring of tax codes at the local, state, and federal level to ensure a radical and sustainable redistribution of wealth.
-Federal and state job programs that specifically target the most economically marginalized Black people, and compensation for those involved in the care economy. Job programs must provide a living wage and encourage support for local workers centers, unions, and Black-owned businesses which are accountable to the community.
-A right to restored land, clean air, clean water and housing and an end to the exploitative privatization of natural resources — including land and water. We seek democratic control over how resources are preserved, used and distributed and do so while honoring and respecting the rights of our Indigenous family.
-The right for workers to organize in public and private sectors, especially in “On Demand Economy” jobs.
-Restore the Glass-Steagall Act to break up the large banks, and call for the National Credit Union Administration and the US Department of the Treasury to change policies and practices around regulation, reporting and consolidation to allow for the continuation and creation of black banks, small and community development credit unions, insurance companies and other financial institutions.
-An end to the Trans-Pacific Partnership and a renegotiation of all trade agreements to prioritize the interests of workers and communities.
-Through tax incentives, loans and other government directed resources, support the development of cooperative or social economy networks to help facilitate trade across and in Black communities globally. All aid in the form of grants, loans or contracts to help facilitate this must go to Black led or Black supported networks and organizations as defined by the communities.
-Financial support of Black alternative institutions including policy that subsidizes and offers low interest, interest-free or federally guaranteed low-interest loans to promote the development of cooperatives (food, residential, etc.), land trusts and culturally responsive health infrastructures that serve the collective needs of our communities.
-Protections for workers in industries that are not appropriately regulated including domestic workers, farm workers, and tipped workers, and for workers — many of whom are Black women and incarcerated people— who have been exploited and remain unprotected. This includes the immediate passage at the Federal and state level of the Domestic Workers —Bill of Rights and extension of worker protections to incarcerated people.

Community Control
-Direct democratic community control of local, state, and federal law enforcement agencies, ensuring that communities most harmed by destructive policing have the power to hire and fire officers, determine disciplinary action, control budgets and policies, and subpoena relevant agency information.
-An end to the privatization of education and real community control by parents, students and community members of schools including democratic school boards and community control of curriculum, hiring, firing and discipline policies.
-Participatory budgeting at the local, state and federal level.

Political Power
-An end to the criminalization of Black political activity including the immediate release of all political prisoners and an end to the repression of political parties.
-Public financing of elections and the end of money controlling politics through ending super PACs and unchecked corporate donations.
-Election protection, electoral expansion and the right to vote for all people including: full access, guarantees, and protections of the right to vote for all people through universal voter registration, automatic voter registration, pre-registration for 16-year-olds, same day voter registration, voting day holidays, enfranchisement of formerly and presently incarcerated people, local and state resident voting for undocumented people, and a ban on any disenfranchisement laws.
-Full access to technology—including net neutrality and universal access to the internet without discrimination— and full representation for all.
-Protection and increased funding for Black institutions: including Historically Black Colleges and Universities (HBCU’s), Black media, and cultural, political and social formations.

What are your thoughts? Is BlackLivesMatter a radical group or is it a legitimate organization?

For a complete view of the BLM Vision manifesto, click here. 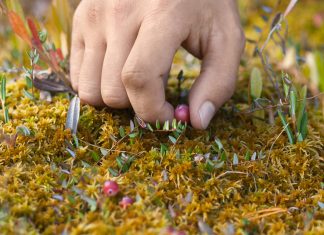 What’s one of the most misleading bits of information about gathering wild edibles? • Easy to find • Hard to find • Poisonous • Availability Answer: Availability Relying on food...

How to Choose Your Concealed Carry Gun