From 1929 to 1939, over 15 million Americans were unemployed and poverty stricken. Aptly named The Great Depression, this time in history forced many to learn to make do with the very little they had in whole new ways.

Chicken Noodle Soup
Grandma was right, soup can cure all. Scientists have proven that eating chicken noodle soup can help get rid of a cold. The soup’s hot steam can help clear mucus membranes and clear your nasal and throat passageways. Many of the ingredients found in chicken noodle soup contain antioxidants and nutrients that can help boost the immune system, such as onions (quercetin), carrots (vitamin -A, beta carotene) and chicken (protein source). The next time you catch a cold, try some hearty chicken noodle soup to help you bounce back on your feet.

Breathing In Steam
One commonly used method to try and clear congestion is to breathe in steam. Yet there aren’t enough studies to prove it actually works. So why bother? Because even if it doesn’t help to clear the sinuses, at least one virus (the rhinovirus) is deactivated in temperatures over 109 degrees Fahrenheit.

Drinking Ginger Tea
Throughout history, ginger has been used to help alleviate a wide variety of medical conditions. During The Great Depression, ginger was grown and steeped into a tea to help relieve nausea, promote stomach health, ease respiratory conditions and so much more. Because of its strong nature, it was usually mixed in with honey or lemon to make it easier to drink.

Gargling with Salt Water
Salt water gargles may not seem like it would be action-packed with benefits but this simple remedy helped many during The Great Depression. Gargling with warm salt water can help reduce swelling in the throat and help flush out bacteria. It can also break up thick mucus and help relieve painful throat infections. Simply mix salt with warm water, tilt your head back and gargle for 30 seconds.

Olive Oil for Ear Pain
Olive oil was mostly used for cooking until people started using it to help treat ear pain. In one study, herbal ear drops containing olive oil helped sooth ear pain caused by infection in children. Although it’s not clear if olive oil kills bacteria that cause ear infections, olive oil does have some antibacterial properties. To apply, lie down with infected ear up, use a glass dropper or cotton swab and and gently dab into ear, put at least two to three drops in your ear and remain on your side for at least 8 to 12 minutes.

Hot Toddy Drink
A hot toddy isn’t exactly a medicine but people who consume this whiskey-ladened beverage swear it works. The hot toddy is mixture of hot water, honey, lemon and whiskey. Many during The Great Depression would drink this to help alleviate cold symptoms like sneezing, runny nose and congestion. (Editor’s Note: Mixing alcohol and medicines can be dangerous. Talk to your doctor about best treatment options. Drink a hot toddy at your own risk.)

Curing Athlete’s Foot with Olive Oil and Garlic
Garlic has many health benefits, but curing athlete’s foot? Many during The Great Depression suffered from athlete’s foot mostly because constantly washing clothes clothes meant using up resources. Simply mix some minced garlic cloves with olive oil and rub affected areas, mostly between the toes.

Using Potato Slices for Headaches
Although not backed by science, using potato slices to cure headaches and migraines is still used as a natural remedy today. Simply lie down and place thin slices of potato on your forehead. Some people will wrap it in thin cloth or just place the slices directly on the temples. Pair it with other headache medications for faster relief.

Cure Hiccups by Eating a Spoonful of Sugar
We all get them without warning. Your diaphragm decides to spasm causing “hiccups.” Eating a spoonful of sugar will force the spastic diaphragm muscles to relax and cure the involuntary hiccup reaction. While it sounds a sweet tasting fix, be sure not to over-do it especially when it come to curing hiccups in kids and people with diabetes. Though this isn’t from the Great Depression, if the sugar doesn’t work, try the two straw method. Put one straw in a glass of water and one outside the glass. Drink from them both at the same time.

The Great Depression was a time where American family’s survival skills, knowledge and resources were truly tested. The sentiment of “neighbors helping neighbors” was a way of life during that time. Perhaps today’s society could learn a little more about that era and appreciate each other more. 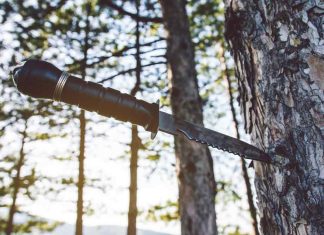 Why You Should Avoid Buying This Type of Knife

Catching Fish During a Flood