Three people have been reported dead in Texas flooding after severe winter storms caused more than 7 inches of rain in the Dallas area from Friday into Saturday morning. One woman is presumed dead after being swept away in the heavy, icy rains and is expected to to cause more widespread flooding headed into Sunday. Much of Texas, Oklahoma and Arkansas have been affected by the wintry storm with no power and continues without no end in sight.

A vehicle carrying the 70-year-old woman was swept away by high waters there Friday morning. During an attempt to rescue her, sheriff’s deputy Krystal Salazar got caught in the surging waters and had to hold on to a tree for two hours. The sheriff’s officer was rescued with minor injuries.

Flash flood watches were in effect for 11 million people from Texas to Missouri. One, for much of North Texas, is scheduled to expire at 6 a.m. Sunday. The rains affecting Dallas were part of a system that was leaving dangerously icy travel conditions to west and north Saturday, from western Texas through Oklahoma and Kansas. Freezing rain was expected from Amarillo, Texas, to just west of Kansas City. About 2.5 million people were under an ice storm warning Saturday morning, including residents in the Oklahoma City area. Another 4 million people were under a winter weather advisory or freezing rain advisory.

How to survive a flood:

How To Survive When Trapped
Click on the link to learn what you can do to survive when trapped in your car during a flood. 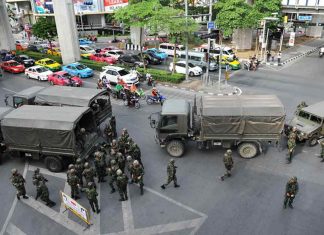 (ModernSurvival.org) - Anytime there is a nationwide crisis, martial law could be put into effect. Martial law is the direct control of normal civilian...

What to Do When Someone Has a Seizure